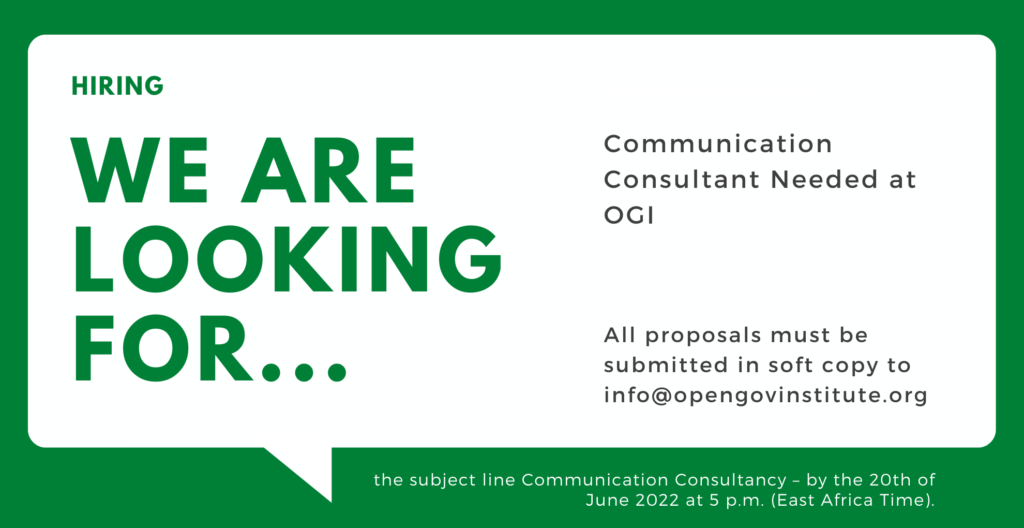 Open Governance Institute (OGI) requires a communication consultant interested in working on our Communication assignment for the NED project in Nandi County.

Interested consultancy firms/companies should submit their proposal (both technical and financial) including current CV(s). The proposal should briefly describe how the consultancy firm/company intends to undertake this assignment. Applicants should also explain how their professional experience matches the skills and qualifications listed.

All proposals must be submitted in soft copy to info@opengovinstitute.org with the subject line Communication Consultancy – by the 20th of June 2022 at 5 p.m. (East Africa Time).

The purpose, scope and requirements of the task are explained in this TOR. 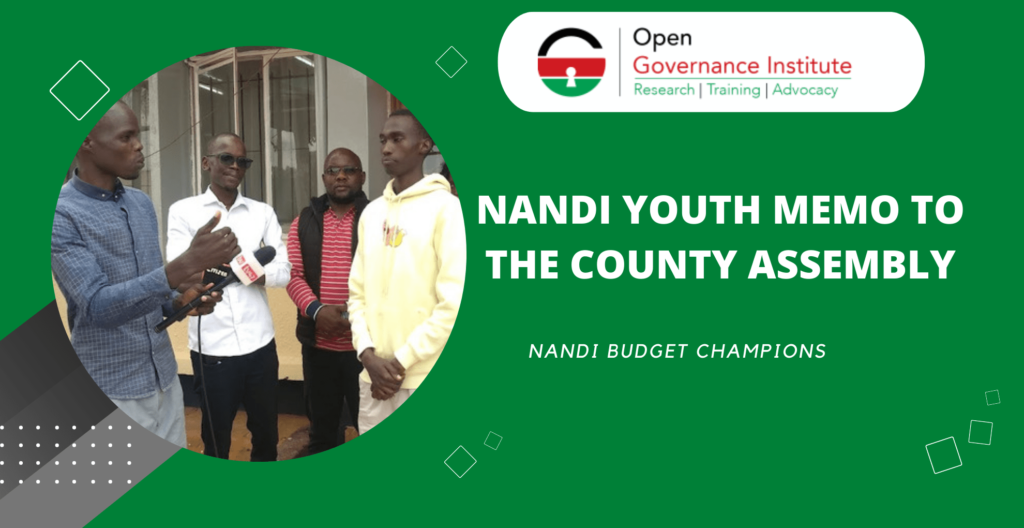 26th May 2022, Kapsabet Kenya: The Public Finance Management (PFM) Act 2012 provides mechanisms through which County Governments should engage citizens to share what their needs and priorities are when preparing budget documents. This consultation creates a sense of ownership of the projects and services the government delivers to mwananchi. Initially, free, fair, competitive and regular elections were meant to ensure representation of people at the decision-making table, but in today’s Kenya elections despite being free and fair, the representatives elected do not fully represent the needs of the people because of little consultations and unclear manifestos which would otherwise mean the people electing them subscribe to what is highlighted in the manifestos. This is why meaningful and genuine public participation is vital today.

Public participation ensures that county government, civil society, youths, the private sector and the common mwananchi together have a rapport on the local priorities, resources-situation and programs. Their participation ensures there is openness, transparency and accountability in governance and inclusivity in decision making. No man is an island, and money and resources belong to the people. Citizens must be consulted on how these limited resources should be used and youths being the majority in this country and Nandi County as well, must be at the table where these decisions are made.

Open Governance Institute has for many years lobbied for meaningful and genuine public participation decentralized to the lowest level which is wards and villages. We are pleased with the decision by the young people of Nandi and especially the over 120 budget champions who are analyzing the budget, asking latent questions in regards to allocations that matter to them and seeking the county Assembly’s intervention through the memorandum. We have offered them technical support and we will continue to do so in our quest for open governance and also ensure they achieve their aspirations.

While supporting the budget champions to analyze the Nandi County budget estimates for FY 2022/23, the analysis queried six red flags such as inadequate absorption of development budget to the recurrent vote where over the four-year period beginning 2017/18, the county had a budget of Kshs. 32 billion out of which 64% went to recurrent and 36% to development vote absorbing 93% of the allocation to the recurrent vote and only 50% of the development vote. The other query was on unsubstantiated budget changes in salary and operations and maintenance where the cost of Personnel Emoluments (PE) or Salaries increased by 66%, and then, in 2017/18, the County Government spent Ksh. 1.7 billion on O&M then later in 2020/2021 the same O&M allocation was reduced by about a half a billion to Ksh. 1.2 billion.

These and more budget credibility issues that are captured in the memorandum submitted by Budget Champions on 26th May 2022 to the County Assembly give us more reasons why public participation is important for all and especially the youths who are languishing in poverty with no stable sources of income. Some of these unutilized funds could be used to create Youth Agricultural and Business Enterprise Fund for youths as they have indicated in the memo where they can borrow these funds to rear chicken or do other agribusiness activities and then pay later when they sell their products.

In conclusion, in Article 1(2) of the Constitution of Kenya, young people are empowered to exercise their sovereign power directly through public participation and platforms that promote self-governance. Further, the County Governments under section 34 of the County Government Act 2012 are obligated to enhance self-governance for communities in the management of development programs and to ensure the protection and promotion of the interests and rights of minorities and marginalized communities. It is therefore our call to all of us to support these young people of Nandi in seeking their rightful involvement in budgets. The County Assembly of Nandi should consider their submissions and revise the Budget Estimates in their favor.